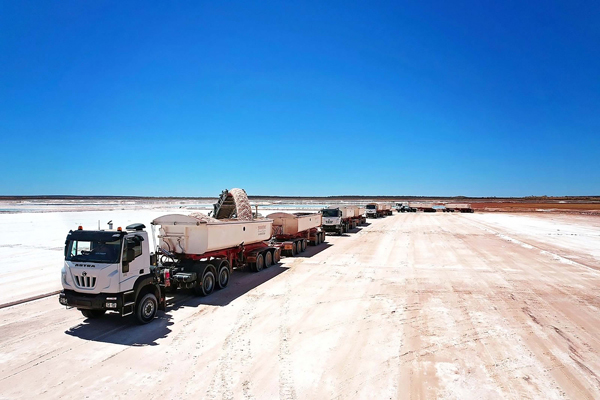 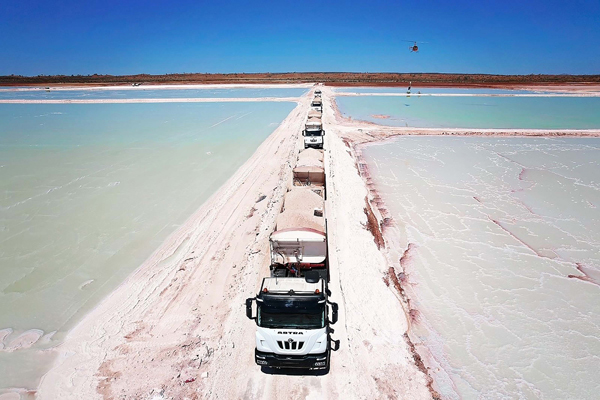 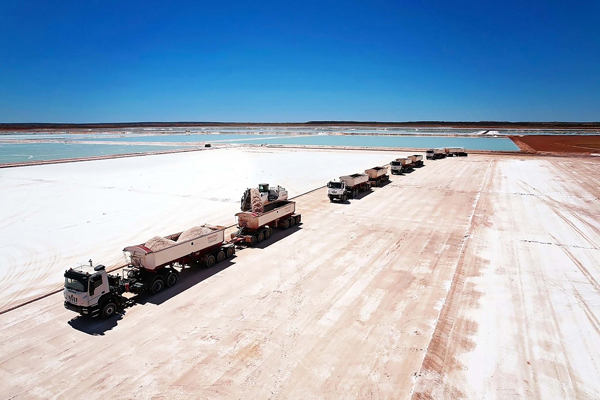 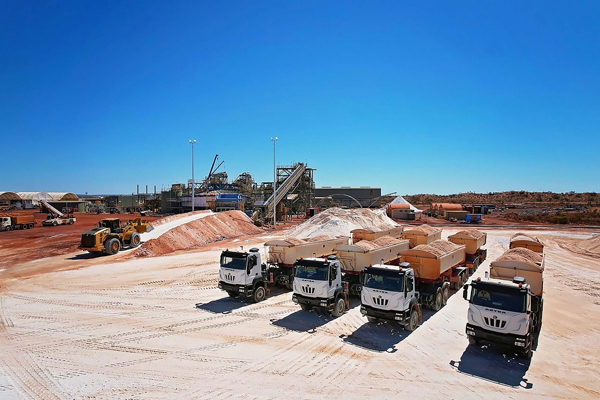 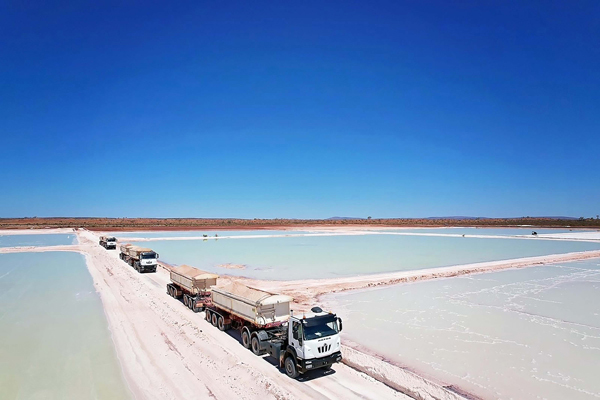 Innovative mining and exploration company, ASX-listed Kalium Lakes, has become Australia’s only producer of high-grade sulphate of potash (SOP), which is used as a farming fertiliser both domestically and as an export commodity.

Based at a large site in Newman, in the Pilbara region of WA, the SOP is developed through a multi-stage process, beginning with the extraction of brine from the lower aquafer using bores. From here it is pumped through a series of ponds to promote evaporation, before being harvested using large milling machines and delivered to an on-site purification facility which converts the salts into premium SOP products.

It’s in the harvesting process where a fleet of five IVECO 6x6 ASTRA prime movers is playing a major role.

The trucks which feature 13 litre engines producing 520hp and 2400Nm, are coupled to road train trailer sets and operate at 90 to 100t GVM, although are rated to accommodate 130t if required. Travelling slowly alongside the milling machines, the trucks are filled on the move by the harvesters, before transferring the salt to the purification facility for processing.

With the first of the five units now in operation for several months, Kalium Lakes Non-Executive Director, Brent Smoothy, said the vehicles which are owned by his company K19 Mining, and being leased to Kalium Lakes, had delivered many benefits.

“We had been using American trucks for this task but after having come across the ASTRA, we thought it would be a better fit for this application,” Brent said.

“Initially some of the drivers were a bit sceptical of making the shift, but after spending some time using the ASTRAs, they now simply wouldn’t go back.”

With hub reduction to all three axles as well as triple differential locks, the ASTRA provides impressive traction when required, while Brent said that other benefits of the model where the Allison full automatic transmission and the great manoeuvrability of a cabover configuration.

“At times the conditions can become quite sloppy during harvesting, so the 6x6 drive gives us added peace of mind,” Brent said.

“The full automatic is also easy to use – we run the trucks at idle alongside the harvester for loading and you don’t have to worry about the clutch. The trucks’ turning circle is also impressive, all up the ASTRAs are easy to use, comfortable and great on fuel.”

Operating 12 hours per day on single shifts, the trucks rarely travel over 50 kilometres per hour or cover long distances, however the operating environment is tough, with outback temperatures regularly sitting in the 40s, according to Brent.

“Most days you can’t put your hand on the outside of the truck body, it’s too hot and it will burn; the ASTRAs handle the conditions easily though, we’ve never had any cooling issues,” he said.

Brent is also impressed with the trucks’ design and ease of maintenance, with servicing being handled by Kalium Lakes’ own workshop, with assistance from IVECO if it’s needed.

“The ASTRAs are well-built and robust to handle the conditions, all components are also easily accessible for maintenance and for cleaning which is important given they operate in a salty environment,” he said.

With Kalium Lakes steadily increasing its operations and now into a third stage of expansion, the ASTRA fleet will likely grow in the coming months.

“The trucks are performing very well; we’ll continue to use them and grow a uniform ASTRA fleet,” Brent said.

“We also see the ASTRAs as being quite versatile, once they reach their planned 20,000 hour operating cycle in this role, I think they’d be perfect as a fertiliser spreader giving them a second life.”