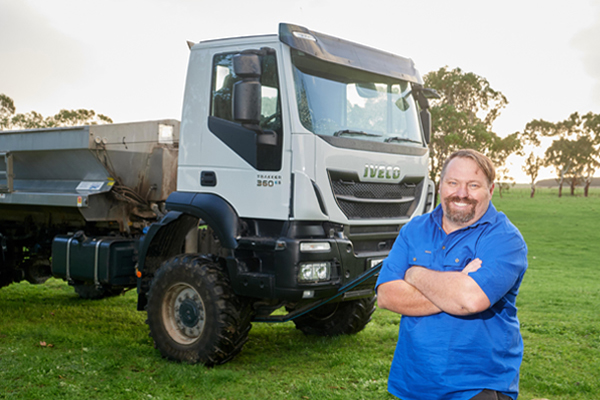 Mark Robinson, owner and founder of Robinson Spreading, recently purchased his first-ever new truck. The vehicle he chose, the IVECO Trakker 360 4x4, has proven to be exactly what he hoped it would be.

Based in Mount Gambier in the south eastern corner of South Australia, Robinson Spreading is a fertiliser spreading business run by Mark and his wife, Sandra.

“Our work takes in all types of broad land properties, including dairy farms, cattle farms, sheep farms, and so forth. We cover a large area around lower south east south Australia and western Victoria,” Mark said.

Geographically, Mount Gambier is known for its limestone, volcanic landscape and crater lakes. If nothing else, therefore, those working in the fertiliser spreading business in this part of the world require vehicles that can handle harsh off-road conditions.

“We’ve been in business for about 12 years now and, up until recently, we’d always used second-hand trucks. Then in late 2018, I realised it was time to buy another vehicle and decided to consider all options, both new and used.”

After much investigation, he chose an IVECO Trakker 360 4x4, which he purchased from Adtrans Truck Centre in Laverton North, Victoria.

“After looking around I realised that the Trakker had all the features I needed and provided great value for a truck of its size. Also, I was impressed by the service I received from the team at Adtrans,” Mark said.

“They were right on the money in terms of their advice…Everything they told me has turned out to be completely accurate. I’m very happy with the Trakker.”

Mark carries all types of fertiliser in the vehicle – compost and lime sand, as well as granular fertilisers such as blends and urinas. As he said, the Trakker’s low tare weight means that he gets excellent payloads.

“Obviously, I stick to the legal limit of 6 – 6.6 tonne on the road, but in the paddock, I’ve found I can load as much as 10 tonne and drive all day without a problem,” he said.

With centre front and rear differential locks as well as permanent all-wheel drive to all axles, the vehicle delivers excellent off-road traction. On top of that, its parabolic leaf spring suspension and high tensile steel chassis allow for outstanding articulation over the rough terrain that Mark encounters.

“On the road it’s easy to drive and performs just as well as off road. I spend a lot of time around Drik Drik, which has some pretty large hills. So, I definitely require a vehicle with plenty of power and torque,” Mark said.

Mark said that his new Trakker 4x4 is returning surprisingly good fuel efficiency considering the loads it carries and that a good portion of its work time is spent over undulating paddocks.

“That’s another thing that really impressed me. As a small business, every cent counts for us, and with the Trakker I’m able to save proximately 20 litres of fuel a day,” he said.

“To be honest, up to this point, I haven’t been able to fault the truck. I’d even give it top marks for driver comfort.”

This is not to say that Mark hasn’t made some minor but functional additions to his vehicle.

To maximise efficiency by not needing to stop the truck between paddocks that are only separated by an electric fence wire, Mark has installed a simple length of poly pipe at the front of the Trakker that directs the wire towards the ground, allowing him to drive over it without damaging the fence.

“This is my only vehicle, so I drive it pretty much constantly. When you consider that much of this is off road, it’s pretty remarkable that the truck (and me) are still in one piece after a hard week’s work…But here we are!” Mark concluded.