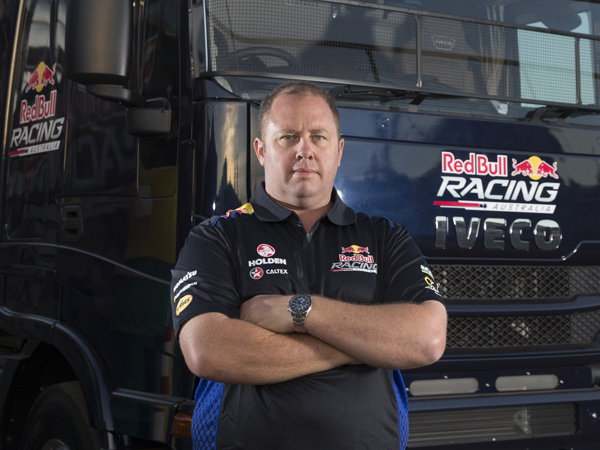 To any outsider, piloting a B-Double race car transporter for leading V8 Supercar outfit Red Bull Racing Australia might seem a glamorous job, but away from the glitz of the grid girls, smell of burning rubber and E85 race fuel, it’s hard work, according to Warick ‘Wazza’ Beames.

Now in his eighth season with Triple 8 Race Engineering under Red Bull Racing Australia livery, Wazza’s place behind the wheel of one of the team’s Iveco Stralis AS-L prime movers followed several years in workshops as a qualified diesel mechanic.  The spanners were then swapped for a heavy rigid licence followed by heavy combination and multi combination tickets and a range of driving jobs from night express to heavy haulage.

Two hours east of Adelaide en route to the season opening Clipsal 500, Wazza ponders how he ended up in possibly one of the most coveted driving jobs in Australia.

“I was mates with a V8 Supercar team mechanic and he knew of an opening – it’s all word of mouth, you won’t find one of these driving jobs advertised,” Wazza said.

“I initially started driving for WPS Racing, spending six months there before the opportunity arose at Triple Eight Race Engineering.  Like most other workplaces, each year we have a performance review and I’m lucky enough to get asked back each year,” Wazza said with a chuckle.

Wazza also sees humour when it’s suggested that there’s a long off season and that life at the race track is pretty leisurely once the Stralis B-Double is parked up and unloaded.

“There’s not a lot of downtime, either during the race season or on our ‘holidays’,” he said.

“Between race rounds and between seasons there’s a lot of work taking place at the workshop, the cars, trucks and all tooling and equipment need to be kept in top shape to make sure nothing goes wrong at the track.

“Yeah when Jamie’s off water skiing everyone else is back at the workshop working their butts off.

“Even washing the truck is an exercise, for a single prime mover and B-double set it’s around a five hour job.”

Thoughts of hotel swimming pools, open bars and being wingman for star racing drivers dashed, Wazza goes on to touch on his other key task as the team’s tyre technician.

“With a third car and Shane Van Gisbergen joining the team, that’s an extra car and plenty more tyres to get ready and look after,” he said.

Of course before anything happens with the tyres, there are garages to set-up and many millions of dollars’ worth of equipment to unload including race cars, spare parts, tools and diagnostic gear.

“It might seem glamourous, and some of it is, but there’s a lot of hard work that goes on behind the scenes,” Wazza said.

And what of the Iveco Stralis AS-L prime mover?

“It’s a pretty good thing, it’s quiet, comfortable and a lot nicer to drive than a lot of the other trucks, particularly the North American brands,” Wazza said.

“I do get asked what it’s like by the other transporter drivers in the paddock and I tell them that the Stralis is a good truck to drive, it has the comfort and driver appointments with all the power to get up the hills.

“Reliability is also important, the team can do all the preparation in the world in the lead-up to a race meet but if there are issues with the trucks that’s a big problem,” he said.

Although the V8 Supercar transporters only travel between 50,000 to 60,000 kilometres in a year meeting race round requirements plus sponsorship commitments, it’s enough for Wazza to have seen some interesting things on the road over his many years of driving – apparently quite a few of them involve caravaners which Wazza quips: “many of them are bloody mad!”

To keep things safe on the road, Wazza has a few simple tips:

-Prepare yourself beforehand, know your trip and where you’re going, and make sure your vehicle is in good order.

-Have a good rest-up before you actually leave, don’t start driving particularly a longer trip if you’re tired.

-Do proper hours and have proper length breaks to stay fresh.

-Be careful of others on the road, especially caravaners!