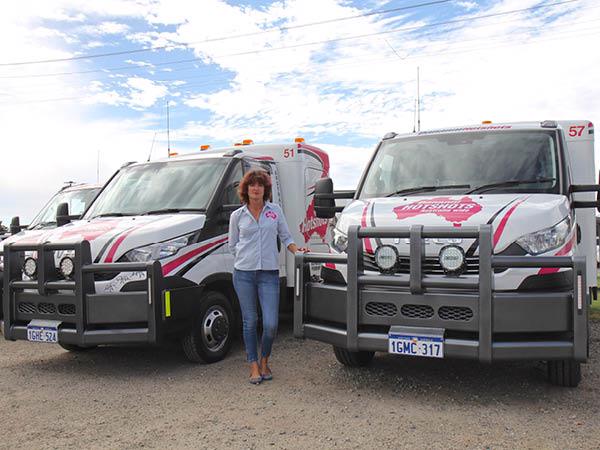 The company is well known for its express freight emergency service, that can be called upon to deliver anywhere in Australia, 24 hours a day, 7 days a week, and 365 days a year.

Servicing a broad client base across the mining, oil, power exploration industries and further afield, Dananni Haulage will transport loads ranging from the very small all the way to 100 tonnes.

The company is even called upon to transport mobile phones to organ donor recipients on the donor waiting list, particularly those living in the wheat belt and mid-west regions of Western Australia.

This involves collecting the phones from Australian Air Express and taking them directly to the patients’ house and even having the drivers set-up the phone in the case of the recipients being elderly or not tech savvy enough.

For loads up to around three tonnes, Dananni Haulage very successfully uses a fleet of Daily 50C and 70C single cab chassis, including several of the latest generation models.

All of the trucks are fitted with tray bodies and customised sleeper cabs, this allows the hot shot specialists to ensure the safety of its drivers and keep the fleet fully ADR / 42-compliant, allowing the two driver teams to cover longer distances.

Other customisation includes bull bars and auxiliary lighting to provide additional safety and visibility; long range fuel tanks which provide an operating range of over 3,000 kilometres and satellite tracking for load security.

Dananni Haulage Director, Danni Kempton, said the company began using the IVECO Daily model back in 2001 and has never looked back.

“The IVECO Daily is a phenomenal vehicle,” Danni said.

“They have proven to be exceptionally reliable and we have three on fleet that have travelled close to 1,000,000 kilometres – an astonishing longevity.

“I’ve operated some other European brand light trucks and they’ve run hot and have been expensive to operate and repair. The Daily on the other hand is just a great overall unit.

“They cover some pretty rough roads when accessing mining sites and have held together so well. None of the Daily trucks have a single squeak or rattle.”

The trucks also feature air-bag rear suspensions, a specification that provides a dual fold benefit, according to Danni.

“The Daily cabins are really comfortable, the drivers love them. The airbag suspension helps give a very smooth drive and also minimises risk to the load especially when we carry delicate equipment,” she said.

“From a business perspective, I’m really pleased with the fuel efficiency of the Daily trucks as well, the previous generation were good but these new models are even better, using about two litres per 100 kilometres less than its predecessor. Given the high mileage we do, this equates to a huge fuel saving.”

Driver acceptance, efficiency and reliability aside, Danni said that another important consideration in selecting the Daily was its safety features, especially compared to its Japanese cab over competitors.

“With a cab over light truck there’s minimal frontal protection, we had a situation a few years back where one of our Japanese light trucks hit a cow and the driver unfortunately sustained a nasty leg injury even with a bull bar fitted,” Danni said.

“This really made us take a very close look at the safety of our drivers and from that day I thought ‘I’m not going to have a driver injured on my watch’. The Daily’s conventional cab design provides additional protection from frontal collision not to mention the four SRS airbags as standard along with other safety features.”

Danni said that the Daily was an ideal vehicle for the application and provided many benefits for Dananni Haulage and its customers.

“The IVECO Daily trucks have been very reliable for us which gives us peace of mind and allows us to provide a great service to our customers. They’ve been an extraordinary vehicle for us and the aftersales support from IVECO has been fantastic,” Danni said.